I’m going to begin by telling you that I know I said the next couple post would be short, but there is no way to make Claire’s arrival into the world story shorter than I have. So please forgive me. 🙂

Monday, June 10th, 2013
I woke up and started to get ready for work when I noticed my face was even more swollen than it had been. My husband would joke around about my “ogre” feet, legs and hands but never had my face been so swollen! I called into the doctors office where fortunately my doctor was on call and was able to see me early in the morning. Once I got there and did the whole pee-in-a-cup thing (I promise I would spare you this detail if it wasn’t an important part of the story.) my doctor came in to see what was going on. She let me know that I had preeclampsia and that the protein in my urine was super high. She told me that she was going to send me to a specialist to check the fluids around Claire and then from there be admitted to the hospital for a 24 hour urine test where they would check the protein levels. (Sorry, still a big part of the story.) This is when I started to cry, right there in the doctors office. It wasn’t that I was upset or really even scared, I wanted everything to be ok with Claire and I had no idea what to expect with the hospital stay. She let me know that we would be celebrating Claire’s birthday either that week or at the latest at 37 weeks. I was 35 weeks and 3 days at the time. After leaving the doctors office I went to the specialist and my husband met up with me and brought the only things we had really bought or packed for our hospital stay (we were planning on packing our bags later that week.) The ultrasound showed that the fluids were just fine and we went on our way to admissions at the hospital. The first night there was a pretty calm one, however, the levels of protein were really really high and my blood pressure was way above where it should be. The next morning, my husband went home to grab some more clothes and while he was gone, the doctor came in and told me they were going to go ahead and induce me. Of course, not knowing what to expect, I for sure thought that Claire would be making her entrance before Phil got back. Hint: I was very wrong.

Tuesday, June 11, 2013
They wheeled me down to my labor and delivery suite and not much longer after my husband got back. Then they started me on magnesium. They use this to stop labor as well as an anti-seizure medicine. It basically makes you really really hot and after a while makes you feel like you cannot move any part of your body on your own. Fast forward to that evening when the doctor gave me a pill to start labor. (I was not dilated at all.) I had been in bed all day, had the monitors on my belly to measure Claire’s heartbeat and the contractions. I was SO uncomfortable. Not in pain, but so sore from not being able to get out of bed and using all my energy just to try and move from one side to the other on my own. It was such a long night and as soon as I’d fall asleep the nurse would come in to readjust the monitors on my belly or the IV machine would start to make noise. BUT I was hopeful and so excited to meet my little girl!

Wednesday, June 12, 2013
The doctor came in early the next morning and I just knew I would be delivering Claire very soon. Hint: I was wrong again. I had dilated HALF a centimeter overnight. I was bummed. I was so sore and just wanted to be able to walk around and brush my hair and teeth on my own. The doctor gave me another pill to try and help me dilate. A couple hours later, he was able to break my water. I was so excited! I was on pitocin and still on the magnesium at this point. After a couple more hours of not much progress, they took me off the pitocin and let me take a nap. (One good thing about magnesium, it makes you very relaxed and tired so napping during labor was no problem.) Once I was up they put me back on pitocin and just a little bit longer I was finally having contractions! The anesthesiologist came in and gave me my epidural. A couple hours later, it wore off. They came back in and gave me another. My nurses this day had been so awesome and funny. They spent a lot of time making sure I was as comfortable as possible. The next time I was checked, I was 4 centimeters! An hour later I thought for sure my epidural had worn off. I was feeling so much pressure and could feel the contractions again. When the nurse checked, she told me I was feeling the pressure because I was 10 centimeters! Everything from this point happened pretty quickly. The doctor came in (who happened to be more pregnant than I was!) and had me do a couple test pushes while the other nurses were getting everything ready. About ten minutes and a few pushes later, at 6:45 pm, my beautiful 4 pound, 15 ounce and 19 inches long, amazing, precious and perfect baby girl was here! Despite being 35 weeks, my sweet girl was fine. She spent no time in the nicu and I was and still am so thankful to God for blessing us with her and letting her be healthy even though she was born 5 weeks early! We spend the next couple of hours snuggling with her before having our visitors. Easily, hands down, worth EVERY single minute of the 29 hour labor and most certainly the best day of my and my husband lives.

Thursday, June 13, 2013
I was still on magnesium and even more drained than I had been previously. My husband spent this time taking care of Claire. He had never really been around a newborn so the fact that he was able to do all of her feelings, change her dirty diapers (which prior to her birth, said he never would) was so amazing. I begged late afternoon to take me off the magnesium and they did! A couple of hours later, I was able to sit up and hold Claire! It was so incredible. That night we got wheeled to another room where they kept monitoring my blood pressure. They also told me I would be up and walking again that night or the next morning.

Friday, June 14, 2013
Around 4 am, the nurse came in and helped me walk for the first time since TUESDAY morning! The rest of this story involves some serious cabin fever and readiness to go home! When the doctor came in, she let us know that they were going to keep me another day. We spent a lot of time just getting to know our princess.

Saturday, June 15th, 2013
The doctor came in and let us know that we were getting to go home. A couple hours later we were on our way home for the first time as a family of three! Claire’s going home dress was so big on her but she still looked so beautiful!

I am so thankful for my amazing husband, family, friends, nurses, and doctors that made the experience what it was and the care that they all showed Claire and I!

I will forever be grateful to God for blessing me with every single moment of this experience and for blessing Phil and I with our amazing daughter!

Warning: This is a super long post, but it includes really cute clothes.

My sister and I went to the mall yesterday in quest of using our 40% off entire purchase coupons at banana republic and gap. Of course, being obsessed with pint sized clothes we didn’t even make it to banana or gap until a couple of hours later. I this mall. It is full out “outlets.” Let me point out the use of quotations – you can usually get the same prices at the regular stores, but fortunately we got lucky and found some awesome deals! Maybe I don’t this mall so much after all. Here are the newest additions to Baby C’s collection: 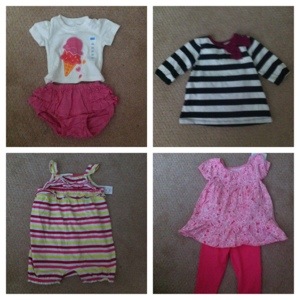 Seriously, y’all… The Ice Cream shirt and ruffled bloomers, striped romper, flower dress and pink leggings were all on sale for $1.99. $1.99! The navy and white dress was on sale for around 7 bucks. Aweeeesome!

I’m seriously in love with this outfit. Floral top was originally $25 then an additional 20% off for their “outlet” price PLUS my 40% entire purchase coupon. Leggings totaled $3.50 after all sales! 70% of baby gap leggings! I’m a fan. 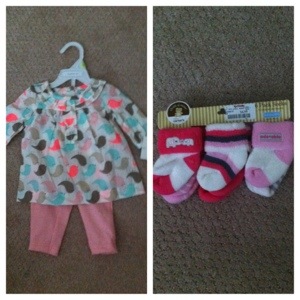 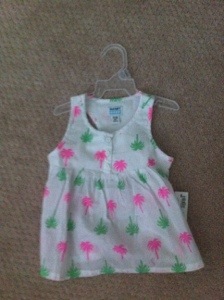 I wrote lastly, but that was a joke. I forgot about the bottoms I found:

And this time I’m for real, that is it! Those were my (incredibly awesome) finds! I can’t wait to see my cute girl in these new outfits! Huge thanks to my sister for helping me find some of these great finds and for being patient as I looked through every. article. of. clothing.

Also congratulations if you’ve made it through this whole post. I promise I will reward you with a shorter one next time!

I’d like to begin by letting you know that I am most certainly not a writer nor a blogger, I simply wanted a place to document the milestones of my daughter, Claire. I’m also going to post about the products I love and her precious outfits (which I’ve come to realized she will outgrow much quicker than I would like for her to.) I would also like to let you know that I am obsessed with Claire and she has changed my husband and I in the very best way!

When I was pregnant I loved to find list on what people claimed to be their favorite products and their list of “can’t live withouts.” My family and friends were also a tremendous help in giving me insight on things that I seriously had no idea about. How was I supposed to know which bottles to use and which pacifiers soothe the baby the best?! The internet will give you pros and cons on every single product you look up, which is a good thing. I’m a fan of hearing why people either love or hate something.
Disclaimer: Each and every baby is different and the things that we love may not work for everyone.